Cookie preferences
This website uses cookies, which are necessary for the technical operation of the website and are always set. Other cookies, which increase the comfort when using this website, are used for direct advertising or to facilitate interaction with other websites and social networks, are only set with your consent.
Configuration
Technically required
These cookies are necessary for the basic functions of the shop.
"Allow all cookies" cookie
"Decline all cookies" cookie
Amazon Pay
CSRF token
Cookie preferences
Currency change
Customer recognition
Customer-specific caching
Individual prices
PayPal payments
Selected shop
Session
Comfort functions
These cookies are used to make the shopping experience even more appealing, for example for the recognition of the visitor.
Note
Statistics & Tracking
Affiliate program
Track device being used
Categories
Advantages

Destination Delta – a trip down the Amazon 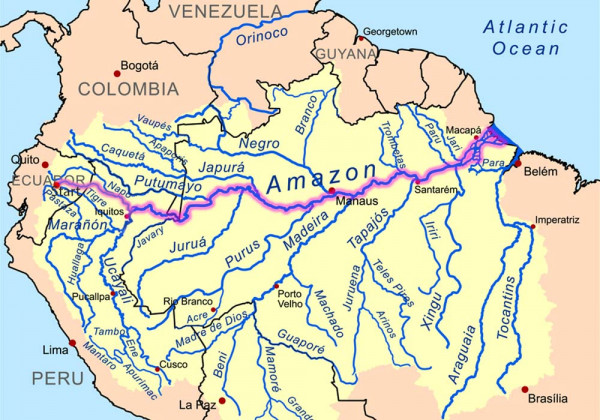 Julian Naidu and Konstantin Pissarsky are two students who fell in love with the Amazon and the rainforest during their year of voluntary service overseas in Ecuador in 2017. Three years later, they plan to return and cross the Amazon to the Atlantic Ocean in a canoe.

‘...The unique biodiversity, the enormous trees and the sheer beauty of nature fascinated us, and even back then it occurred to us that one day we would like to cross the Amazon rainforest completely...
...Back in Germany, we became particularly aware of the tragic side of the Amazon’s future. Reports are piling up about the clearing of huge areas of forest in Brazil, leaking oil pipelines in Ecuador and indigenous tribes being harassed and expelled from their land...
The plan is to start paddling in September 2021 from the west of the Amazon basin in Ecuador, and then follow the course of the river further and further down until we reach the Atlantic.’

Julian contacted us in September 2020 and asked for support in the form of hammocks, mosquito nets and the experience of Matthias, our founder, who had done exactly the same thing years ago. At that time, Matthias spent several weeks travelling the Amazon in a dugout canoe. AMAZONAS was born out of these experiences. Matthias recognised a kinship with the two explorers and immediately agreed to support the lads with their ‘Destination Delta’ project.

We supplied them with our outdoor hammocks and tarps, which are specially designed for longer tours with many overnight stays in them. You can read about their experiences in their first test report here.

The two of them will be sleeping in our hammocks for many nights on their tour. It all depends on the right lying technique!  If you want to know more about this, click here for the Brazilian lying technique.

We are excited about this trip, and look forward to more reports from Julian and Konstantin!

Moskito-Traveller Thermo
Content 1 Piece
€89.90 *
This website uses cookies, which are necessary for the technical operation of the website and are always set. Other cookies, which increase the usability of this website, serve for direct advertising or simplify interaction with other websites and social networks, will only be used with your consent. More information
Decline Configure